You are here:
At What Price: Medicare for All

If Medicare for All should ever become reality, America would face a far greater cost than the multi-trillion dollar price tag. This government controlled, single-payer health care system would come at the expense of Constitutional rights that are supposed to be preserved, protected, and defended. This should come as no surprise where health care is concerned.

The current multitude of health care rules and regulations have essentially buried the prohibition against federal interference in the practice of medicine (42 USC 1395). Therefore, it is no wonder that lawmakers are considering socialized medicine as a supposedly viable solution to our health care coverage challenges. However, in exchange for that universal coverage, with private health insurance practically eliminated, Medicare for All legislation overlooks the conscience rights of medical professionals in the effort to prohibit patient discrimination.

Surprise medical bills are a source of frustration for many Americans, and legislation to address the problem appeared to be on a fast track early in the year. But action has since slowed, primarily due to a stand-off between the two powerful interest groups that often benefit from surprise medical bills: providers and insurers.  Complicating this political calculus, Congress has its own interests in seeing this as a “pay for” to extend other unrelated health programs.

One plan Congress is considering would extend federal rate-setting schemes—a practice that is at the heart of proposals to move toward a single-payer system—to private physicians and health programs.  Another would enact an arbitration model, which has a host of problems including imposing contractual terms on parties that have not entered into a contract. 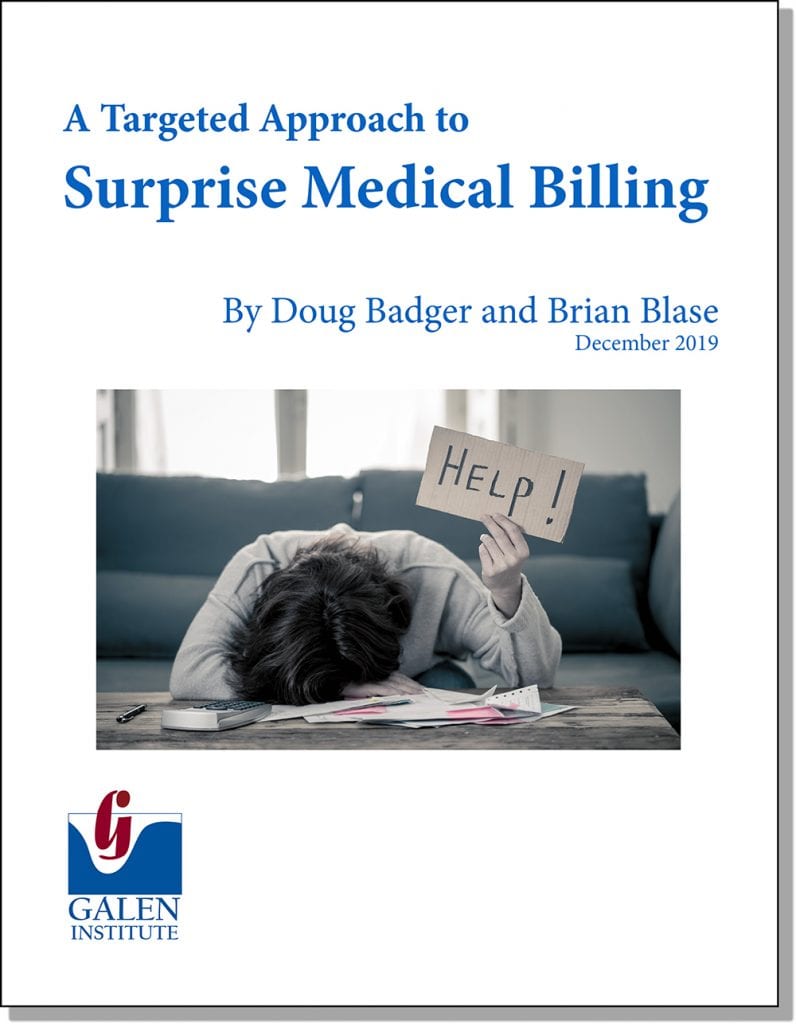 If Congress makes rate-setting the solution to surprise bills, which consumers rightly resent, it may be difficult to explain why it shouldn’t adopt the same approach to medical bills that aren’t surprises, which consumers also often find unpleasant.

Congress should adopt a more thoughtful, targeted approach to the problem. This paper offers solutions to protect patients from surprise bills primarily by preventing insurers and providers from giving false and misleading information to consumers and by requiring that patients receive a good faith price estimate in advance of receiving scheduled care.

Truth-in-advertising protections combined with a good faith estimate requirement leaves one scenario in which patients need protection from surprise medical bills—emergency services at out-of-network facilities. Patients should be protected from balance billing in this situation, and Congress should apply existing federal regulations to determine the rate that insurers compensate providers in this narrowly-defined instance.

Many consumers want greater transparency in health care.  Equipping them with timely and accurate information about medical prices would help reverse the sclerotic effect of price opacity. It would create room for price competition that could lead to the redesign of insurance products. And it would redirect the efforts of government, one of the leading causes of wasteful and inefficient medical spending, toward enabling a consumer-centered marketplace that curbs health care costs through choice and competition.

Earlier this year, the Journal ran a separate investigative article explaining how the Indian Health Service repeatedly ignored warnings about a physician accused of sexually abusing patients, moving him from hospital to hospital. Together, these articles describe a broken culture within the Indian Health Service, demonstrating how government-run health systems provide poor-quality care, often harming rather than helping vulnerable patients.

The share of recipients who aren’t eligible has grown sharply since the expansion began in 2014.

Medicaid expansion was a key component of ObamaCare. In 2014 when the expansion started, the feds stopped doing audits of states’ Medicaid eligibility determinations. The Obama administration’s goal was to build public support for the new law by signing up as many people as possible. Now, after a four-year hiatus, the Centers for Medicare and Medicaid Services have begun auditing program eligibility again. According to a report released Monday, the audits found “high levels of observed eligibility errors,” meaning a significant number of people are enrolled in Medicaid who shouldn’t be.

Hospitals and insurers will howl, but the Trump administration today took a big step toward consumer empowerment with administrative actions designed to increase price transparency for hospital and other medical charges.

Galen Senior Fellow Brian Blase, who was instrumental in developing the executive order on price transparency issued in June, congratulated the administration for its proposed and final rules today.  “Transparent prices, particularly linked with incentives for consumers to search for value, will put downward pressure on health care costs and should reduce inefficient spending.”

On November 1, 2019, presidential candidate Elizabeth Warren (D., Mass.) published a lengthy monograph describing how she would pay for her plan to replace the U.S. health care system with a single, federally-run insurance agency: what she describes as “Medicare for All.”

Read More
Biden’s Plan for Health is Already a Failure

Most Democratic presidential candidates are supporting some version of Medicare for All, a radical proposal to put Washington in complete control of the health-care system. Joe Biden, however, promises to “protect and build on the Affordable Care Act,” the last Washington health-care experiment, which is better known as ObamaCare.

Yet ObamaCare largely failed in its primary goal—to create a better market for individual health insurance. The ObamaCare exchanges are performing much worse than expected when they were launched in 2014. And this has nothing to do with the Trump administration. Rather, the law failed because of its perverse construction.

Read More
Medicare For All Would Fail Patients

“Before now, Warren’s radical proposal never would have been introduced by someone with a serious shot at becoming president,” Galen Senior Fellow Brian Blase explains in a piece for RealClearPolitics.

However…“Her prescription to address these problems is all wrong,” he explains, including evidence of the harm a Washington-centric system does to innovation.

“For evidence of the devastating impact of Medicare’s control of payments, look no further than the sorry state of American kidney care, with high death rates and outdated, inefficient treatments. Only 12% of American patients undergo dialysis at home, where they could receive treatment while they sleep, compared to 80% in Hong Kong and 56% in Guatemala.

Read More
What You Should Know about the Uninsured

Last month’s Census Bureau report on the uninsured overlooked an important point: More than 99 percent of Americans have access to health coverage, regardless of their income or medical condition.

The overwhelming majority of those lacking insurance could have obtained coverage but did not enroll.

Many of those with lower incomes may not sign up for subsidized coverage because they know they can receive care at little or no cost to themselves even if they remain uninsured until they arrive at a clinic.

Those in the top two income quintiles may remain uninsured because government intervention in health insurance markets has created a menu of unattractive products at unattractive prices.