A plan offered by the Health Policy Consensus Group 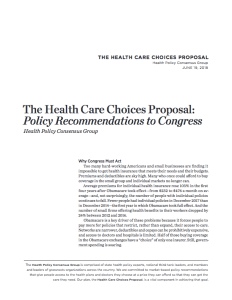 Poll after poll shows that health care continues to be a major issue with voters.

State Sen. Bryce Reeves of Virginia recently received an email from one of his constituents saying his health insurance premiums are more than $4,000 a month for his family and that there is only one carrier offering coverage where he lives. Health insurance costs consume half of his income. “What am I supposed to do?” he asked.

Many Republican candidates feel they are on the defensive in offering solutions after Congress failed to pass repeal and replace legislation last year.

A reporter asked a junior House member what he tells his constituents he will do to lower their health costs: “I don’t have an answer,” he said.

The Health Care Choices plan provides an answer, complementing actions already taken in Congress and by the administration.

After last year’s attempts to pass reform, some are saying Obamacare will collapse if we do nothing.  But that is not the case.  Obamacare’s new entitlements allow an open-ended call on taxpayer dollars, even though the law has broken its promises of providing universal coverage, lowering costs, and allowing people to keep their plans and their doctors.

While the administration’s regulatory actions are important, Congress must take action for real reform to be implemented to usher in a new generation of patient-centered health reform.

A New Generation of Health Reform

A number of conservative leaders from across the country—the Health Policy Consensus Group— worked to develop a new generation of health reform ideas. The plan would provide more choices of more affordable options for Americans struggling under the high costs and limited choices of Obamacare. Importantly, this plan has the support of scores of grassroots groups, state leaders, and citizens groups who are ready to help in getting it passed.

The plan is a genuine federalist approach that moves power and control of our health sector away from Washington, through the states, and ultimately to consumers.

The Health Care Choices proposal would help small group and individual markets heal from the assault of Obamacare, revive competition, and give people choices of coverage they can afford.

for more about the plan, the list of supporters, and testimonials.

Suggested Tweet
There has been a lot of progress through administrative and targeted congressional actions to give people relief from Obamacare.  But much more is needed.  Check out this new plan to lower costs and give people Health Care Choices for coverage they want and can afford. Congress needs to act! http://bit.ly/HealthCareChoicesPlan
Search the site
Key Issues & Archives